In June 2011, SSC was given the opportunity to contract with Sybrant Construction, a local General Contractor, to perform work on a tunnel for the Army Corps of Engineers. Sybrant is a frequent contractor on military construction projects and SSC was honored to be selected as a part of their subcontractor team to successfully complete this project.

The project was a continuation of one started earlier in the year by another out of state tunneling contractor. Sybrant had first constructed an entry shaft 10′ in diameter and 40′ deep. Using this shaft, a 180′ tunnel had been constructed and then abandoned for the Army to use for communication and detection testing. Following this initial testing, the Army required the tunnel to be extended to a finished length of 300′, and SSC was brought in to construct this additional 120′ of tunnel. 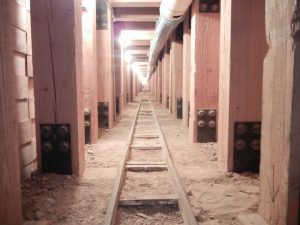 The ceiling and walls of the tunnel were built using 8″x8″ timbers on the walls and 8″ x 10″ timbers on the ceiling (ribs), and filled in between with 3′ x 6′ x 32″ lagging sets. The finished product was a 5′ tall by 3′ wide wooden framed tunnel. Along the bottom of the completed tunnel was a track system, used to push a muck cart in and out of the tunnel to carry supplies in and spoils out. 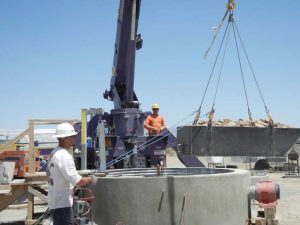 The process was repeated over and over (40 times total) until the full 120′ of additional tunnel was excavated and framed out. Each time the shield was pushed and a set was built, new hose would have to be added for the ventilation system, compressed air for the jackhammers used for excavating and hydraulics for the jacks on the tunnel shield. The entire distance also had to be lighted, and new track had to be added for the cart to travel on. On average the SSC crew dug 5′ each day and built 2 sets of cribbing. This equates into 9 yards of dirt being excavated and removed each day, totaling 600,000 lbs of earth being moved by hand over the course of the project.

The power behind this job was almost all manual labor performed by SSC’s crew. The excavation was done utilizing jackhammers – being held out ahead and overhead – a very physically demanding assignment. The earth being excavated was extremely dense – almost a caliche-type soil. 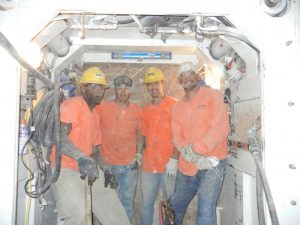 This made for slow and hard digging. Once the earth was hammered loose, it had to be shoveled out of the new excavation and into the muck cart. Each time the cart was filled with soil, weighing approximately 2300 lbs, it had to be pushed, by hand, through the 5′ tall tunnel out to the shaft, where it was lifted out and dumped by a crane. When it was time to build a set of the cribbing, the timbers and lumber were loaded into the cart and those materials were pushed by hand back to the face of the excavation.

The fact that SSC’s 5 man crew was able to withstand these extreme physical challenges and complete this work in 33 days is an almost Herculean accomplishment. Compounded on top of the physical demands were challenges with the tunnel shield that had been constructed by the prior tunneling contractor. It was a non-steerable shield which made keeping on line and grade difficult.

SSC’s team was able to maintain near perfect line and grade, however, and were able to correct issues inherited on the first 180’section of tunnel. The finished project was constructed exactly to the Army Corps’ specifications and will be used for years to come by the various divisions of the military for testing to improve border security and operations in the Middle East. The overwhelming success of this project can be fully attributed to the can-do attitude of SSC’s team.