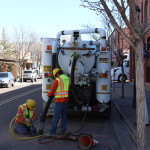 SSC’s pipeline support group has been operational since 2013, when SSC expanded its vacuum excavating services. SSC crews worked alongside natural gas pipeline crews as they exposed and repaired sections of pipeline at dig sites across Arizona.  As the relationship grew between SSC’s crews and the gas company’s crews, SSC began providing more services to support their work and invested in Operator Qualification certifications for crew members as a value-added offering.

It is SSC’s desire to become part of the Northern Arizona communities, and to provide the trenchless technology and vacuum excavating services required to support their growth and investment in maintaining and upgrading their underground infrastructure.  SSC’s owners have a long history in Northern Arizona, as its founders Arvid Jr & Marcia Veidmark attended NAU as newlyweds, and two of their three sons attended NAU as well.

Arvid Jr & Marcia’s attraction to life in Northern Arizona continued, later owning a home and operating a houseboat timeshare company in Page, and finally purchasing a retirement property in Parks.  The team at SSC is proud to continue this family legacy as they build and grow their relationships with the community of Flagstaff and the rest of Northern Arizona.

Contact us today to learn how SSC’s services can benefit your next Northern Arizona project!