“The railroad system continues to be a major component in the transportation of raw materials used in construction projects nationwide, and of both imported and exported products. A particularly high volume section of UPRR track located in far southwestern Arizona is currently being widened to allow for increased locomotive traffic in this key area that connects ports in San Diego with inland hubs. As part of the widening process, the culverts that run underneath the tracks for drainage from one side to the other need to be reconstructed in order to span the increased width.

SSC was contracted by Skanska to perform horizontal auger bores underneath the live railroad tracks to install steel casing that would be incorporated into the new culverts. The project started on August 18, 2014 and called for 16 bores, installing steel casing ranging from 36″ to 60″ in diameter for 40′ to 60′ depending on the location. Once the casing was installed via horizontal auger boring under the tracks, additional footage of casing was welded on each side to create the required span for the new bridges and culvert structures to be built around.

In order to perform work in this type on active rail lines, SSC’s crews underwent extensive training and background checks before being permitted on site. Daily meetings were conducted pre-shift to communicate the day’s work plans with the railroad representatives and coordinate work with anticipated rail traffic. A dedicated railroad flagger was present at all times with SSC’s crews and when a train approached and crossed, all workers would have to move 25′ away from the tracks until the train passed. This constant interruption, combined with the challenging soil conditions of flowing sand and the remote work location, could have caused this project to have significant delays. However, SSC’s dedicated crews with their combined decades of experience working in all soil types were able to complete the work ons schedule, turning over 16 completed crossings on October 6, 2014 for Skanska to then incorporate into their completed project.” 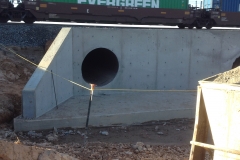 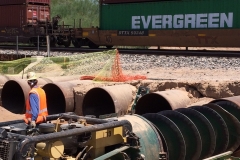 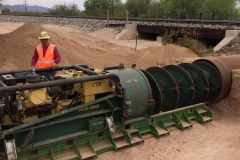 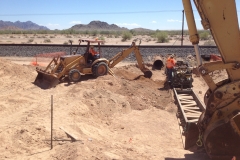