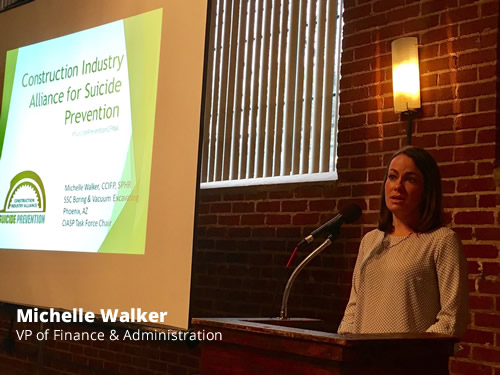 More about the Alliance

Construction is the number one industry for number of suicides and the number two industry in suicide rates. As such, it is an industry imperative to shatter the mental health stigma and create caring cultures within our companies.

CFMA’s journey to promote awareness of mental health and suicide prevention has covered much ground since CFMA’s 2015 Annual Conference, thanks to the tireless efforts of Cal Beyer and Sally Spencer-Thomas. They have published nearly a dozen articles, the first of which appeared in the Nov/Dec 2015 issue of CFMA Building Profits, and spearheaded just as many presentations throughout the construction industry. April 2016 saw CFMA’s Valley of the Sun Chapter hosting the first regional summit on the topic, spurring on other CFMA Chapters to undertake similar initiatives.