Located just north of Phoenix off of the Interstate 17 freeway sits Pioneer Village, a historical park that educates locals and visitors about Arizona’s history in the territorial days from 1863 – 1912. Opened in 1969 by the Arizona Pioneer Association, it has been a popular destination for field trips, serving over 1 million children. In 2010 the private association was no longer able to keep the park open and the City of Phoenix purchased it and began to make improvements to the facilities. One needed upgrade was to the utilities, including an expanded water source to the village. 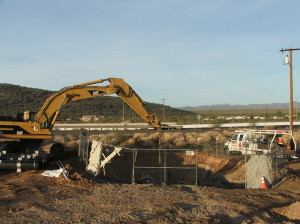 Specialized Services Company was selected as the horizontal boring subcontractor by Quest Civil Constructors, Inc., the general contractor on the project. A 36” steel casing would have to cross from the east side of I17 to the village on the west side to carry a 16” water line. I17 carries three lanes of traffic in each direction at this location creating the need for a 400’ bore to span the distance, one of the longest bores performed by SSC to date. To add to the challenge, the final foot of the bore on the west side of the freeway would be crossing under a main fiber optic line that serviced the nearby federal prison and a large portion of northern Arizona. 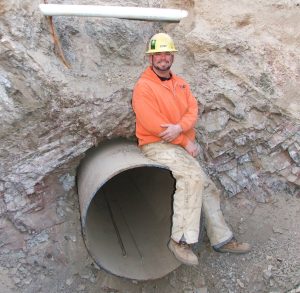 Co-owner of SSC and head of field operations, Abe Veidmark, was up for the challenge. The combination of the length, solid rock soil conditions and extremely critical line and grade made this a job that demanded his leadership and expertise. SSC was equipped to do this job having added a 36” Robbins SBU (Small Boring Unit) head to its equipment fleet in 2009. Prior to the use of SBUs, this job would have had to be performed using hand tunnel to contend with the rock conditions. This would have created a footage production rate of 4’ per day, whereas the SBU was able to generate 20’ per day. “In Arizona’s rocky soils and with the constant expansion of freeways creating the need for longer bores, SSC’s offering to its clients of the SBUs is critical to maintain production on today’s fast paced construction projects”, says Abe, “the slow production rate of hand tunnels is no longer an option in many circumstances, which is why we chose to invest in both the 36” and 24” SBU heads”.

The bore was started with the SBU and a 36/600 American Augers bore machine. After 200’ was installed, the weight of the auger was too much for this bore machine and it was replaced with a 48/54 Barbco bore machine which offered greater horsepower to keep the auger spinning. Learning from this experience, Abe reports “On future projects of this length I would select our 60/66 Barbco bore machine to turn the auger as even the 48/54 was maxed out by the end.” The bore was completed on almost perfect line and grade, finishing only 2” to the right and 3” low, easily clearing the fiber optic line and in exact location needed for the open cut crews to tie onto. While there were some line and grade challenges encountered throughout the bore, this successful final alignment was achieved using the steering adjustments offered on the Robbins SBU head combined with proprietary adjustments that SSC has created throughout its decades of boring in Arizona soils.

Upon conclusion of the bore, the 16” waterline was pushed through the steel casing by SSC on stainless steel casing spacers, connecting the historical village to its new water supply. SSC is proud to have been a part of the construction team working on the upgrades to Pioneer Village, enabling an estimated 25,000 school children each year to continue to learn from and enjoy this Arizona landmark!